A large share of purchases are made online nowadays and in 2020 this number has grown significantly thanks to the lockdown. As the number of internet users increases and tech companies develop more ways to integrate the online world into shopping, online retail is expected to grow exponentially. Logically, many consumer buying decisions are made online as well, and where do people spend most of their online time — on social media.

According to GlobalWebIndex, 54% of social media users use social media to research products and 71% are more likely to purchase products and services based on social media referrals. I bet you yourself made a purchase decision based on what you saw in your feed at least once, be it a post from a friend or an ad that convinced you.

It’s hard to say exactly how much social media influences customers, not just what they buy, but their consumer habits in general. Social networks changed the way we promote products and even gave us new ways to advertise. Let’s talk about some factors that impact customers nowadays.

The first thing that you notice when it comes to customers on social media is the shortened customer journey. It used to be that people found out about a product, saw an ad on TV multiple times, and next week they may have gone shopping and finally bought the product. Now, this process can take minutes.

According to the Deloitte report, 29% of social media users are more likely to make a purchase on the same day of using social media. That means that once they see a product, they simply click on the link and buy it: there’s no need to wait before they go shopping. Moreover, the same report states that consumers who are influenced by social media are four times more likely to spend more on purchases.

The customer journey is not just shorter but it’s also more complicated now. Social media has made product research more accessible to users. For example, if your customer sees a product on Instagram, they can immediately search the hashtag to look up other reviews and decide whether they should buy it or not. As a result, customers spend more time on research and check more sources for reviews.

62% of customers say they share bad customer experiences with other people. Thus it’s extremely important to keep an eye on your online reputation and seek out reviews on social media. Remember that every review on social media is important — and that fits nicely with my next point.

2. The influence of social proof Every time you tweet or post about this amazing cafe or the shampoo that did wonders to your hair, your social media followers see it and might be moved to try it as well. The same goes for negative opinions and rants. As per Forbes, 81% of consumers’ purchasing choices are influenced by their friends’ posts on social media.

As I mentioned above, social proof mostly impacts your friends and the people you know. But more and more people on social media don’t just follow their friends — they also follow influencers. That’s where influencer marketing comes into play.

3. The power of influencers on consumer buying decisions

Influencers are the social media users that have a robust loyal audience that often shares the same interests. Their opinions are naturally seen by a bigger number of people, people that trust them.

According to a study by the Influencer Marketing Hub, almost 50% of Twitter users have made purchases as a direct result of a Tweet from an influencer. 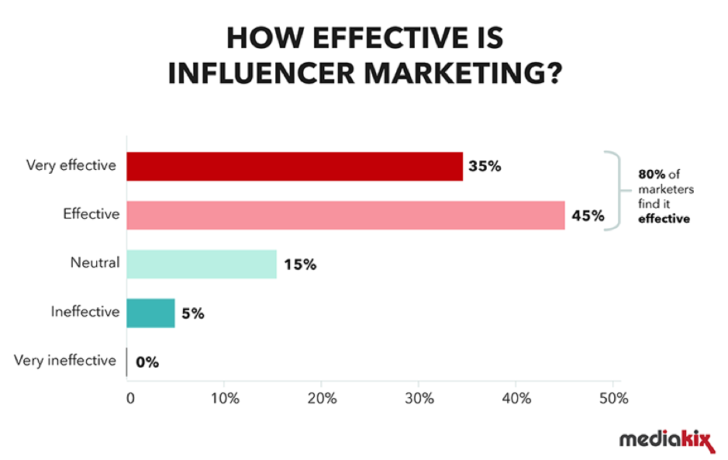 Micro-Influencers are especially effective in persuading their audience since they are usually experts in some niche and specific topic, which makes them a natural source of recommendations for this topic. If you’re selling a niche product, finding social media influencers in your niche — Instagram bloggers, vloggers, TikTokers, or Facebook group admins — is a great way to reach your audience.

Gen Z and Millenials are more likely to be influenced, with 84% of millennials saying user-generated content from strangers has at least some influence on how they spend their money.

The influence of Stories on consumer buying decisions

Ephemeral content is a relatively recent trend but it’s already winning over social media users and brands alike. Snapchat was the first to use Stories as a format, but it’s Instagram that popularized it and now boasts more than 500 million daily active users. The content shared via Instagram Stories is typically more raw and unfiltered, which allows brands to create a more genuine image. It enables companies to take people behind the scenes and show how they operate, their work culture, and the team behind the products. All this helps to foster an authentic connection to a brand.

Facebook remains the biggest social media platform in the world (with almost 1.7 billion users), even though it had its fair share of scandals and controversies in recent years.

The sheer size of the network means that you’ll be able to reach more people on there but be careful — Facebook is not as popular as it used to be. Edison Research’s Infinite Dial study from early 2019 showed that 62% of U.S. 12–34 year-olds are Facebook users, down from 67% in 2018 and 79% in 2017. This decrease is particularly notable as 35–54 and 55+ age group usage has been constant or even increased.

In 2015, Facebook was responsible for influencing more than half, 52% of consumers’ online and offline purchases, shows DigitasLBi Commerce.

Lately, the company has been trying to fix its reputation by introducing more control over advertising and data management.

Instagram is an amazing platform for brands since it gives you so many opportunities to show off your product: photos, videos, Stories, galleries, filters, and more. It now boasts more than one billion monthly active users.

What’s great about the platform is that it’s popular among all generations in all countries. 80% of Instagram users follow a business account. 73% of U.S. teens say Instagram is the best way for brands to reach them with new products or promotions.

Moreover, the platform itself facilitates shopping by adding shopping tags and checkout options to the posts. 130 million Instagram accounts tap on a shopping post to learn more about products every month.

Although TikTok is a relatively new platform, its rapid growth made it an important source of brand awareness for social media users, especially Gen Z.

TikTok now has 800 million active users worldwide, and 41 percent of these users are aged between 16 and 24. So, if you want to reach a younger audience, TikTok is the place to be.

TikTok’s algorithm is also amazing for niche and specific products since it curates your feed based on your interests. It makes your job of finding new followers easier — the algorithm will push your content into the feeds of your potential audience.

According to Hubspot, Twitter is a source of product discoveries for many people. Because of its quick nature and ability to connect to basically anyone, it’s a perfect place to ask for recommendations. SproutSocial shows that 53% of consumers recommend businesses or products in tweets while a further 48% follow through to purchase those products or services.

There’s a debate on whether YouTube is actually a social media platform or more of a streaming platform or content platform. Nevertheless, it’s one of the most popular platforms out there. More and more people are looking up product reviews on the platform. Keep in mind that 80% of people who said that they watched a YouTube video related to a product they want to buy said that they did so at the beginning of their buying process.

If you’re ready to invest your time in creating content for YouTube, it can be a highly rewarding task. Just look at the BonAppetit channel that belongs to the magazine of the same name. It has almost 6 million subscribers and more than 1,3 billion views when the total circulation for the magazine doesn’t exceed 1,600,000 copies in a year.

However, it’s getting more and more difficult to make your brand stand out on social media. Focusing on the right platform, building creative social media marketing campaigns, and using up-to-date technologies will help you with that.

Reblogged 11 minutes ago from www.searchenginewatch.com